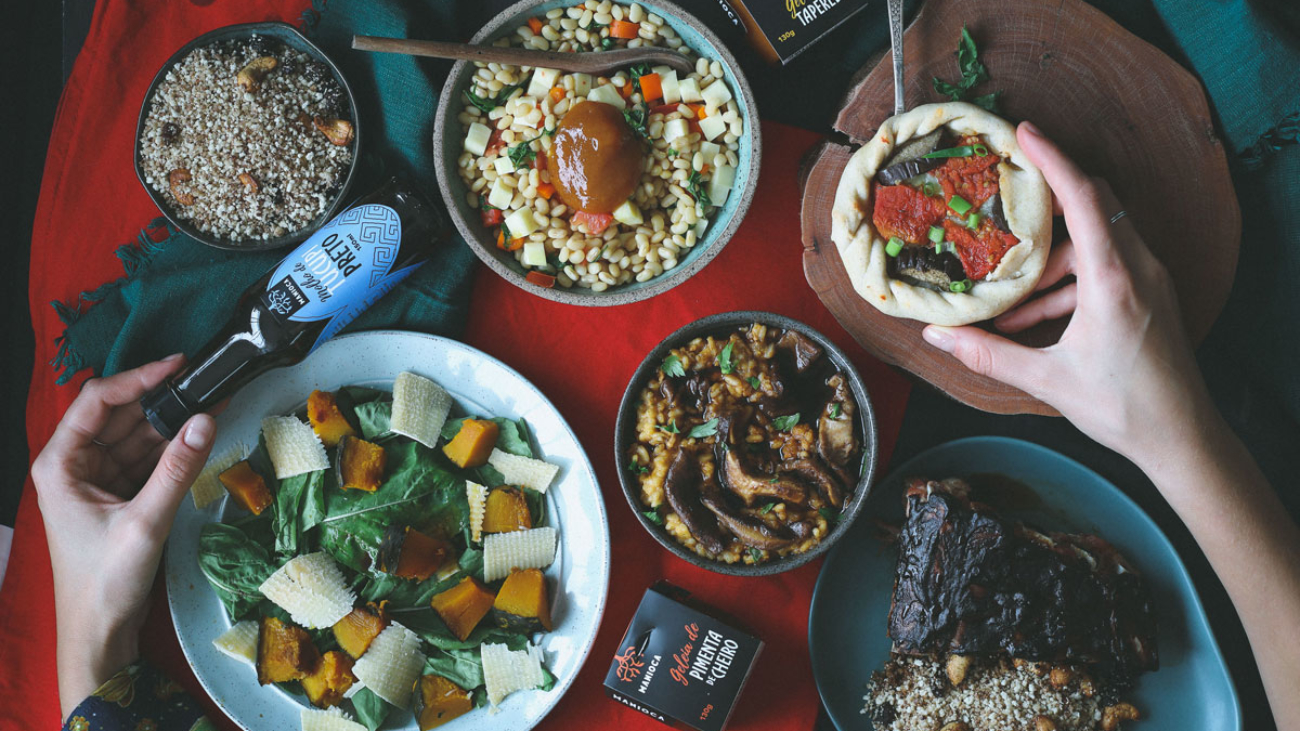 Member of the 2019 class of the PPA Acceleration and Impact Investment Program, maniac prepares for a busy 2021, with new product launches and growth forecast of at least 60%.

The company started the year 2020 with bold plans, but the covid-19 pandemic has postponed the execution of the planned strategies to 2021. Even so, the company learned a lot, invested in online sales and is in the final stages of negotiations to receive a new investment from the ABF Fund (Althelia Biodiversity Fund Brazil).

It is from Belém, Pará, that Manioca is managed by partners Joanna Martins and Paulo Reis. The company is defined by the duo as a small industry with a social and environmental impact, which transforms ingredients from the Amazon into natural, practical, healthy, innovative and full of flavor foods. At the same time, this entire process is carried out in dialogue with the communities, generating local development, fair trade and structuring of production chains.

With the drop in sales in 2020, Manioca decided to try ecommerce. The response was very good. member of the movement Amazon at home, Forest standing, was one of the companies with the best performance in online sales with Mercado Livre.

“From the partnership with Mercado Livre, we were able to make ecommerce viable, to the point of investing. Today there is a person in Manioca dedicated to digital commerce, ecommerce operations and marketing. Our view on this has changed a lot,” says Joanna, the company's CEO.

2020 was also dedicated to better understanding the business, the consumer and possible paths.

“One of the greatest lessons we have learned since we created Manioca was the relationship with the market. We have a vision 'from the inside out', from the Amazon to Brazil and the world. And in general, the businesses that innovate and gain access to markets are exactly those that come from the outside. Being able to do what we do is already a paradigm shift, because generally those inside have a perhaps more limited view of the market in general, do not understand the outside consumer very well, and this sometimes makes innovation or product adaptation difficult. ”

Seeking to understand the consumer's perspective, Manioca realized the desire for practicality and natural foods. Thus, the guideline of working with more accessible, simpler products emerged, and at the same time maintaining the appreciation of flavor. Solutions that are tasty, healthy and practical. This orientation is present in the new products that will be launched throughout this year.

There will be five new products, which reflect Manioca's vocation of being an industry of spices and flavors from the Amazon. At the same time, the company will start operating in new segments of the food industry.

The first of these products, available to the consumer as of February, is a new version of tucupi, in smaller quantities and already with this reading key of being, also, a seasoning.

“Tucupi is an incredible product, 99% that people who taste the broth like. It has a very good acceptance. With this in mind, we started to question ourselves about how to make this product common in the lives of Brazilians. Stop being just Amazon and become a product of Brazil. As happened with the cheese bread, which was from Minas, and the açaí, which was from Pará, and now both are considered Brazilian products,” defines Joanna.

The company also recently launched the Sementes line, which offers cumaru, cocoa nibs, nuts and, soon, puxuri. And it started to market its products in Portugal.

Before participating in the PPA Acceleration Program, the manioca perceived the social and environmental impact that the business generated, but did not systematize these results. From the acceleration process, the company went deeper into the impacts generated in its production chain and focused even more on the business.

“Our actions were structured and systematized. We started to take a deeper environmental look. We have always understood that, by promoting the social development of our suppliers, while also valuing our culture, we were bringing environmental gains to the region. But from the acceleration, we understood that it was possible to implement several other environmental actions to expand this gain,” highlights Joanna.

Other points highlighted by the CEO of Manioca in this process include the connection that the Program made possible with people, other businesses and entities, which made the company realize the impact ecosystem in development in the region and strengthen itself in this movement.

Manioca participated in the two investment rounds promoted by the Program, and managed to invest in both.

“We had many gains with the Acceleration Program, and that didn't just happen in that first year, when we were accelerated, but that reverberate until today. And this shows how much this network has strengthened over time and how important and necessary these connections are for this region to develop more and more”, she assesses.

Look at the production chain

The concern with structuring and strengthening the production chain also reveals a careful look at suppliers, with a development program that prepares them not only to provide inputs for Manioca, but also for the relationship with other potential customers.

This preparation includes sanitary adjustments, formalization and other important points to ensure a minimum standardization of inputs, while maintaining the artisanal and cultural footprint, respecting each producer.

“The Amazon is a territory where there is a lot of production, but little formalization. In general, these producers, even because they are from family farming and the absence of the state, are very little professionalized and formalized. The role of our program is to support them, guide them, train them and make them improve, whether in their structures or in their production processes, in the standardization of products. Nature gives us different products depending on the time of year, the soil in the territory, but there are production processes that manage to reduce these differences a little”, highlights Joanna.

Manioca hired an architect to support producers in improving their production structures, creating structural plans for flour houses, tucupi and black tucupi production. Producers wanted to improve production structures, but they didn't know how to do it, because there are no specific guidelines. At the same time, they were afraid that the structures were not adequate or accepted for formalizing their business.

“We want to ensure good food handling and safety practices, but in dialogue with the culture. The industrial process in general, of standardization, brings an external culture that often oppresses the culture of our traditional peoples. We are concerned about not making the production environment an industrial environment. It continues to be handcrafted, maintaining the cultural characteristics of each producer, but at the same time it brings food safety, health and more standardized processes so that we have better products in the end. ”

THE Tipiti, a company in the 2019 cycle of the PPA Acceleration Program, ended the year 2020 with the launch of its own brand of cachaça, Jambul.

The product consists of artisanal cachaça aged in pink jequitibá wood barrels, purchased in bulk from a producer in the region near Santarém, and jambu leaves and flowers supplied by AMABELA (Association of Women of Belterra).

In 2019, with resources offered by the Acceleration Program, Glinnis da Rocha, one of Tipiti's partners, took the course Master Alambiqueiro and Standardization, sensory analysis and blending principles in Itaverava, MG, given by Cana Brasil – Technology Center in Cachaça. With the knowledge acquired, she and her partner, Ingrid Ribeiro, created their own version of the tasty cachaça with jambu.

“We chose the name Jambull because of the strength of the bull, metaphorically married to the fortitude attributed to the cachaças with Jambu that we have in the market, and in reference to ourselves, women entrepreneurs, especially from the Amazon, who reinvent themselves time and time again,” she says. Glinnis.

The first batch of cachaça was distributed in the last week of December 2020, and Tipiti sold its first 12 bottles. Current production is around 30 liters per month, in 100ml, 300ml, 500ml, 750ml and 1 liter versions available. Jambulll's application for registration at MAPA has already been submitted.

Currently, Jambul is marketed through the social networks and by WhatsApp (93 99187-8387), with delivery and/or pick-up at specific points in Santarém, Alter do Chão and Manaus, in addition to Nova Colina – Sobradinho, in DF. And it should arrive in Rio de Janeiro in March.

Over the next six months, the intention is to multiply sales and expand production, consolidating the brand and starting online sales. Within a year, having already registered with MAPA, Tipiti hopes to further expand monthly sales and start implementing the project of having its own distillery. And in two years, the goal is to have a production of at least 200 liters/day in its own distillery and the seal of sustainable wood management for aging.

Created in 2015, the company participated in some incubation and acceleration processes. When he joined the PPA Acceleration Program, he sold six products - jams, peppers, açaí coffee, cassava flour, tapioca flour and liqueurs - from different partners in the region, with the objectives of forest conservation, valuing the knowledge of the peoples and the dissemination of Pará culture.

Throughout the Program, Titipi was already seeing investment in the development of its own products, using inputs from small producers in the region. With the Covid-19 pandemic, the company had to suspend direct contact with communities. The partners decided to invest in the development of Tipiti's first product, the Jambull cachaça, and guarantee that others will come.